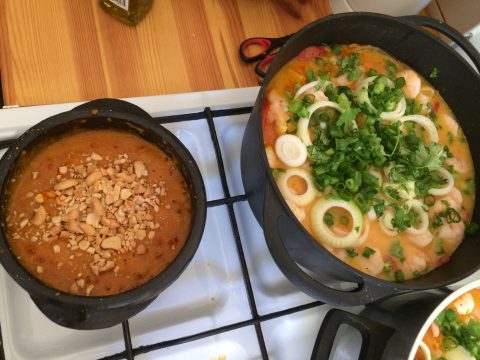 Moqueca is a Brazilians’ favorite dish for many reasons: it is practical to make, it is healthy, and involves a combination of ingredients that is genuinely Brazilian. Fish, Urucum , coriander, tomatoes, plus coconut milk, pepper and dendê oil (the last three only in the baiana – version) are the main stars of this complex combination of flavours. According to many sources (family and friends mostly) I consulted to write this text, moqueca is a plate with indigenous and African origins. While the moqueca capixaba (from the State of Espírito Santo) seems to be more connected to the indigenous origins of the dish, the baiana version (from the State of Bahia) uses African ingredients like the dendê oil and coconut milk.

Until today, we prepare moquecas in a clay pot (panela de barro). Most Brazilian houses have at least one clay pot for moquecas. I remember at my mother’s home how our panela de barro was always stored in a secret spot in the kitchen, only put out in the ‘moqueca’ occasions, as it was fragile and heavy. Moqueca, as many other main course Brazilian dishes, is served with rice. The never-to-be-missed companion of the moqueca is called Pirão, which is made with the fish broth from the moqueca thickened with cassava flour. Moqueca, pirão and rice, that’s all you need for a perfect Brazilian easy-going Sunday. 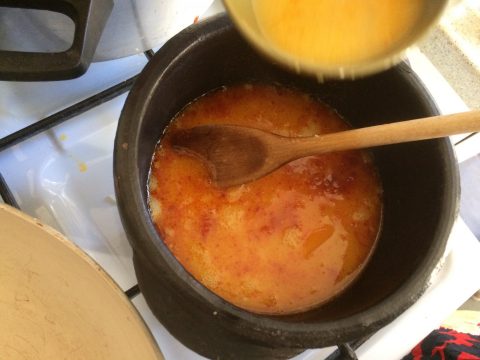 If you are going to cook moqueca, you have to know that it is so loved by Brazilians that there is a dispute between capixabas and baianos about it. Some capixabas (individuals from the State of Espírito Santo) claim that the only true moqueca is the one made in Capixaba lands. “The rest is fish stew”, many capixabas would say. In my experience, there is no way of disliking any of the available versions. There is a variation of the moqueca for vegetarians in which fish is replaced by banana da terra (plátanos) and there is also moqueca of siri, which is one type of crab. To every moqueca, you can add shrimps and make it extra special. What makes it really special, however, is cooking it with a nice music in the background, without any hurry, and surrounded by friends and family as the Brazilian ritual commands. 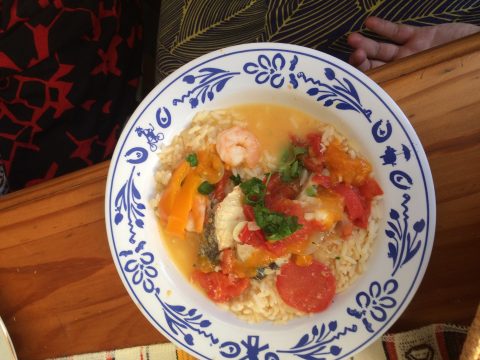 If you want to be on the mood for cooking a moqueca, I have selected a top 10 songs moqueca-cooking soundtrack:

With thanks to my dear friends, one capixaba (Laura) and one baiana (Kamila), who helped me figuring out the nuances of moqueca within each region.

Ingredients for the moqueca:

Ingredients for the pirão:

Season the fish with the juice of the lemon and salt. Leave it waiting (if it is warm, put in the fridge) while you prepare the other ingredients.

Chop the onions in cubes and the tomatoes in slices (take out the seeds). If you use the pepper, also chop it in slices.

Put your pan (your clay pot if you have) to cook in low fire. First you add oil (could be olive or another) and the urucum in powder. Wait until the pan warms. Add half of the onions and fry them a little. Add half the tomatoes (and half the pepper) in layers covering the bottom of pan the best as possible, as if you are making a bed for the fish. Put the fish slices on top of it. Cover the fish with the rest of the onions, tomatoes (and the pepper) in another layer.

Add the coriander chopped and season with salt. Add the two cans of coconut milk and dendê if you are doing the baiana version. Cover the pan and leave it to cook for around 15 minutes, without moving it. If you see that the fish is cooked and there is enough broth, the moqueca is ready.

If you want to add shrimps, you can fry them quickly in a frying pan and then pour them in the moqueca in the end.

How to prepare the pirão:

In a smaller pan (also clay pot if you have) add oil and urucum. When it is warm, add the onions and tomatoes to fry. Then add the fish broth that you get from the moqueca. Add the chopped coriander and season with salt (you can add pepper, but not black pepper, could be chopped chilli). Leave it to cook for a few minutes to get all the flavours mixed. Add the cassava flour and move with a wooden spoon without stopping. It should become with the consistency of a cream.  To decorate it, you can put chopped cashew nuts on top.