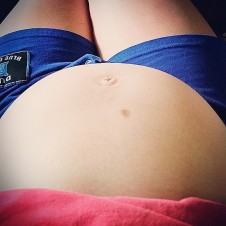 “It is certainly not going to be easy [sad emoticon]. Maybe I will not have the support of all my family, nor the family of my boyfriend, but for me it is enough to have the persons who are there for me in this difficult time [sad emoticon]. Yes, maybe I am 19 years old, and many people say that I fucked up in life, but a baby is the greatest blessing, and I think it is better to be a young mother than to become one when you are already old, like 30. I am grateful for this beautiful gift that God send me [heart-eyed emoticon]. I will be a good mother for my child [heart] and my boyfriend will be a great father”. – Facebook post by Valentina (19)

Meet Valentina from Chile. Her Facebook profile picture shows how she is taking a ‘selfie’ in the bathroom mirror – her exposed pregnant belly at the center of attention. Her boyfriend is standing behind her – bear chested – while they both watch how their family portrait is unfolding on her cellphone screen.

As a researcher, we may all secretly have one: a favorite respondent. Valentina is mine. She is a perfect example of the way young people rework their identities on social media. Being pregnant at a young age, Valentina is transgressing society’s moral boundaries. Not only is teenage parenthood seen as deviating from ideals of mother- and fatherhood, it is also often stigmatized as it would interrupt an appropriate transition into adulthood, including ideas about sexual behavior. While Valentina is going ahead in life, she will be seeking out a new self in a new situation. And the virtual world offers her an accessible space to do so. Valentina’s personal identity transformations become visible on Facebook.

Indeed, youngsters increasingly spend time online to present who they are (Boyd, 2014), and this includes their sexual identities. In one of her posts Valentina reminds us: “I know I will be like this again. I will get my beautiful waist back”. She adds an older photo – again a ‘selfie’ taken in a bathroom mirror-  in which she is lifting her behind towards the camera, showing off her waist that is covered by a small top. I regularly come across this type of ‘sexy-selfies’ while scrolling through the Facebook profiles of young Chileans, even though in Chile, young people that are living in with their parents are often restrained in their expressions of sexuality and sexual desires (inspired still by the catholic moral code that disapproves sex before marriage). Even though many Chilean youth actually are sexually active, their parents often consider them ‘morally immature’ and grant them little agency over their sexual selves. Yet, the presence of ‘sexy selfies’ on Social Network Sites show us that social media do offer them freedom to experiment with an emerging sexual identity, feeding their desire for autonomy . Young people like Valentina therefore seek for online spaces that are out of reach of condemning adults, and where peers can comment on their own and each other’s daily life in a vivid, narrating way.

Online traces and the cultural context

The way that young people make use of Social Network Sites these days, should be understood as simultaneous with, embedded in, and related with the offline world. In the various ways young people embrace social media, they show us how their lives are affected by the broader social and cultural systems (Boyd, 2014; Miller, 2011). Hence, understanding Valentina’s Facebook usage will help to understand aspects of Chilean culture too. In one of her posts Valentina criticizes the disapproving attitudes of people towards ‘sexy-selfies’ by stating: “Everyone is free to do whatever they feel like with their bodies. In Chile there are only ignorant people”. Chile is a country that (in legal- sociopolitical sense) can be considered one of the most morally conservative of the continent. This becomes apparent, for instance, through the heated debate on abortion – illegal on all grounds – that is currently taking place. At the same time, Chile also stands out having the highest percentage of social media users in Latin America. This made me wonder how the online-offline linked self-presentations, such as those of Valentina, reflect both societal values and beliefs that they bring with, as well as the agency that young people exert to shape their sexual and gendered identity. This is what I will be researching the coming years, with a special focus on young people who are in one way or another transgressing society’s moral boundaries (such as young parents and gay youth).

Meanwhile,  Valentina’s life has changed.  “You preferred another women over me, so stay with her”, she writes. “I will have a beautiful baby girl and there is no more room for men [kiss emoticon]. It will just be me and my baby [heart-eyed emoticon]. It won’t be long until I can see your little face and have you all days with me [heart-eyed emoticon]. Without a doubt, you are the best present [heart]”. While Valentina is counting down the days until her daughter will be born, her Facebook profile mirrors and magnifies the struggles and joys of her everyday life, and I am there to witness.