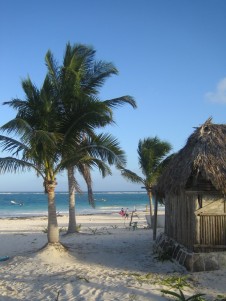 The Mesoamerican Barrier Reef, with its 1,000 km, is the second largest barrier reef in the world (after Australia’s Barrier Reef) and the largest in the western hemisphere, following the coasts of four countries – Mexico, Belize, Guatemala and Honduras. But it is also a region where tourism is the major source of income (an average of 100 million tourists per year, creating 43% of the GNP in the Caribbean region), which is why there is an enormous impact on the systems of reefs, sea grass, mangroves and wetlands. The conditions of the reef, where life-sustaining nutrients are low (oligotrophic), make ecosystems more susceptible to environmental damage. Although there is a lack of information on the processes involved in the damage to this large group of ecosystems, it is widely accepted that there is a need for research on this theme, due to a lack of conservation efforts (Rivera-Monroy 2004: 845). Much of the research focuses on specific areas, but does not always compare strategies and policy outcomes within the different countries that border the barrier reef. A comparison between the conservation politics of Mexico and Belize can be made, because more research is available on these countries, than on the other two. Such a comparison can be part of a better understanding of the dynamics involved in such complex conservation projects.

The conservation of ecosystems is not just about protecting biodiversity. Because different parties are dependent on these ecosystems for its livelihood, it has everything to do with people as well.

The conservation of ecosystems is not just about protecting biodiversity. Because different parties are dependent on these ecosystems for its livelihood, it has everything to do with people as well. Especially in the tropics, where a high biodiversity is combined with high levels of population, but also with high levels of poverty and weak governments, many actors are involved. The success of different endeavors in conservation can be considered from a general or a specific perspective. In the first case, general attitudes and types of legislation can be evaluated, while in the latter, a more local approach is used through the evaluation of social dynamics. When these evaluations are made, the measure of progress is an obstacle – what defines progress and success for one party, might not be considered the same by another party. A clear tendency can be seen however in literature on this topic: most studies seem to focus on matters of biodiversity.

A common definition of success in managing protected sites would be a situation where there are “management activities such as enforcement, boundary demarcation, and direct compensation to local communities” (Brechin 2010: 365). The territories being protected ideally represent proportionally the diversity of the region and should not be randomly selected, in order to avoid misrepresentation of current ecosystems in protection practices. If one assumes that this rule is being followed, a rate of 10 to 12 per cent of protected area per type of ecosystem would result in sufficient protected area globally in order to preserve biodiversity in general. This rule should be implemented carefully however, because when a goal rate is made public, governments tend to cease efforts to increase this number. Due to this common focus on biodiversity alone when discussing conservation, sociological factors are often overlooked and not taken into account when defining success in conservation.

The problems that have been identified in relation to the Mesoamerican Barrier Reef have also spiked international interest. The scuba diving industry has been an avid promoter of responsible practices regarding coral reefs for many decades, which spurred the creation of Project Aware. This project, started by the Professional Association of Diving Instructors, has monetary objectives in terms of diver retention in an era where ecotourism is a must, but has put coral health issues on the international agenda, via the mobilization of PADI members to promote awareness and organize local projects, such as beach clean-ups. An international organization from the non-profit sector, in which Project Aware acts as a supporting member, was founded in 1994 under the name of ICRAN: International Coral Reef Action Network. This network has many partners and its Mesoamerican Reef Alliance (MAR) from 2003 analyzes and promotes conservation in relation to this part of the worlds coral reefs. It is founded by Coral Reef Alliance (CORAL) and supported and coordinated by UNDP. The MAR-project lasted for three years and was aimed at watershed management, sustainable fishing and sustainable tourism (ICRAN 2013). It is interesting that no mention of waste management occurs in this rapport, because this is a substantial problem in for example the Belizean Cayes.

The six areas of conservation along the Quintana Roo coast, seem designed mostly to counter effects of tourism. The official goals are the preservation of natural environments, the safeguarding of biodiversity, a rational use of ecosystems and a means of providing resources for scientific study (Brechin 2010: 375-6). The official purpose of the creation of parks such as Xcalak and Puerto Morelos overlaps with the goals just mentioned, but the major benefit is actually for the local population, whose objectives were to “link conservation and development, to create an overall integrated coastal zone management program, and to foster participatory coastal management mechanisms” (Brechin 2010: 379).

In the creation of this goal, where conservation and economic growth would go hand in hand, conflicts of interest arise. Problems for fishermen were the decrease in fishing grounds and the increasing competition of non-local fishermen that did not abide by these standards, while tour operators wanted to prevent fishing to create a better experience for divers. Also they feared revenue would go to foreign operators and that fishermen – who are in control of licensing – will favor their livelihood over that of others. Although the federal government responded positively with regards to the proposed goals and the idea of delegating management of ecological reserves to local levels, it was clear that economic interests and international pressure were of big influence. Once the actual park was to be created, resistance became more obvious from within the government, because different ministries had different interests. Eventually they gave in to the creation of the park, because of the pressure of tourism demands. With regards to Puerto Morelos, an ambivalent response also illustrated that the creation parks paces development in order to avoid ‘cancunization’ and maintain a local character (Brechin 2010: 382-3). In Xcalak, after 2000, federal control increased and funding for locals was ended.

In Belize, the main problems that cause controversy or a clash of interests are the rules regarding fishing and waste management, and the prevention of damaging the corals by tourism. In order to prevent direct damage to the reef by tourists, local captains and fishermen, mooring buoys have been installed by Coastal Zone Management, rules on the behavior or tourists around corals and on fishing methods and seasons have been established, but resources are limited. Just like in Mexico, illegal fishermen without the necessary permits arrive from neighboring countries and thus escape the control that has been established.

In terms of pollution, it was found that the establishment of marine reserves and other types of protected areas is not enough to counter some problems that come from without (land-based). The establishment of the Coastal Zone Unit  (CZU) in 1990 was partially to solve the lack of management that was necessary to also implement the necessary changes outside of the reserves.  The unit lobbies successfully for legislation and collaborates with the Belize Tourism Board, Belize Port Authority and other organizations, to actually implement the legislation achieved. This implementation can be improved, as more training and personnel is required (Gibson 1998: 235).

It can be said that the main structural problem for Belize, a country with both a small population and a small economy, is the actual application of what is planned on paper. The main practical problem in terms of causes of reef damage, is pollution, because of the distance (inland versus at sea) of cause and effect. Agriculture and forestry activities cause run-off that is not being addressed sufficiently, while sewage and waste management problems are also minimally tackled. It is interesting that Gibson, McField and Wells mention that the creation of committees at a local level is successful in augmenting concern and participation (1998: 240), because the local conflicts of interest are actually a lot more complicated. A good example is the waste management on the island of Caye Caulker. Although legislation that prohibits littering at any place on the island is in place, and fines are to be given to anyone accused of this practice, not much is actually achieved with this regulation. Litter is only cleaned up in the areas were tourists – and probably researchers from foreign universities – reside, but in the areas of the island where guests never venture, garbage piles are accumulating on the beach and in the water. Even household appliances are placed in the lagoon on the west side  of the island, because fishermen claim it attracts fishes to improve their daily catch. This means that one measurement to improve the condition of the reef (creation of parks where fishing is regulated or partially prohibited) can actually augment pollution somewhere else. The authors of the article seem to have failed to notice these indirect relations.

The transition of separated marine reserves to an integrated system of coastal management is critical to conservation success in Belize. Although the presidents of all four countries that have a part of the barrier reef in their marine territories have signed an agreement in 1997 to improve collaboration, Belize is the only country so far that has integrated management (Gibson 1998: 242). Reality shows however that national concern for the health of the reefs can clash with economic goals, and that improved management and more resources are required to attend to these issues.

Within the regions themselves we can see that the approach taken – the creation of marine parks – in response to the knowledge obtained on the deteriorating condition of the corals in these areas, is not sufficient to address the problem, because part of the problem lies elsewhere. A more total approach by federal governments, taking into account also waste management, agricultural pollution, national education, border-crossing fishermen and the amount of available resources to execute legislation, is required in order to achieve a greater success rate. Preservation of biodiversity should not only include ecological factors, but also the management involved to maintain these marine parks, because the socio-economic and political factors involved can complicate this matter to a great extent. A regionally integrated approach, where fishermen licensing is similar and applicable in all four countries, can be researched in order to regulate these problems more successfully. The NGO’s interested in creating a regionally coordinated approach can play a helpful role in this process.