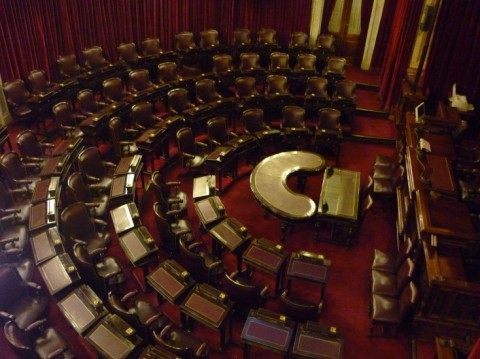 Let me tell you about electoral fraud

Although I am in Buenos Aires to investigate the 2009 reform of the law on political parties – not a good conversation starter at parties, I can tell you – something that continues to come up in my interviews is the topic of electoral fraud. And boy, do these Argentines come up with ways to tamper with the ballot. Electoral fraud in Argentina is closely connected to the country’s peculiar voting system. Whereas most countries in the world have passed to a system where the state provides the voters with a single piece of paper with the candidates of all parties, in Argentina every party has to provide its own ballot.

The system of multiple ballots, as it is known here, has several impracticalities. First of all, there are some 500+ parties which may lead to voting booths with more than 20 different ballots (not all parties run in every district). Secondly, my respondents speak about the common practice of stealing ballots. This means that a member of, say, the governing party enters the voting booth, casts his vote, and leaves with all the ballots of the opposition party in his pocket. The next voter for the opposition finds no ballot and has to cast his vote for a different party instead. Thirdly, only 50 ballots are available per party per booth. This means that the ballots need to be replaced every now and again. Clearly, no other party will do this for you, so every party needs a representative at each of the +/- 86.000 voting stations throughout the country to ensure that its ballots are available. As one of the government officials said to me, this is a good way of ensuring that only parties with a presence on the ground (think clientelism and patronage) gain electoral representation.

The difficulty of getting basic norms – such as the presence of ballots in every voting booth – to function is visible in other areas of political life as well. The other day, I got a tour through parliament by one of the political assessors that I have met during my interviews. She explained to me the intricacies of of the system that measures whether a quorum is present. The quorum consists of the presence of half of the Members of Parliament – hereafter MPs – without which parliament may not initiate its sessions. So in the 2010-2011 period, when the government had a minority in parliament,its block would simply not show up when an unfavorable proposal was discussed. No quorum means no session means no proposal. And no, that does not mean that the proposal is simply transferred to the next day; I asked.

Clearly, it is an arduous task to count whether the necessary percentage of MPs is present. This was solved by the incorporation of a sensor in every chair, which measures whether the MP is present or not. Unfortunately, the new technology gave rise to the phenomenon of diputruches, or people that were hired by the MPs to sit on their chair to pretend that they were present. Luckily, the Argentines have found a way to make sure that their MPs can no longer cheat the system. They have installed a finger print scanner in every congressional seat in order to check whether the person pretending to be an MP is actually an MP or not. Imagine all those MPs that actually have to show up for Congress now…

A similar control measure is currently proposed with regard to the system of multiple ballots. Last week I visited a meeting of the Constitutional Affairs Committee in Congress, which discussed the possible introduction of a system of single ballots. It was a great experience: people were shouting, television cameras everywhere, and several MPs in very tight, dare I say too tight, leggings (Argentina has one of the highest numbers of female legislators in the world). The result of the debate was that the parties would form a smaller committee to discuss the proposal in a more orderly fashion. Sounds like a sensible idea to me!

One of my respondents is not very optimistic, however, about the new proposal. He tells me that rather than obstruct electoral fraud, it would instead become much easier to commit electoral fraud with the single ballot. His literal words were something like “you just instruct the personnel at the voting stations to put an extra cross on those ballots with a vote for the opposition so that they become invalid.” Alas, yet another control mechanism bites the dust. Let’s see what they can come up with next to forge (?) politicians to respect the democratic rules of the game.