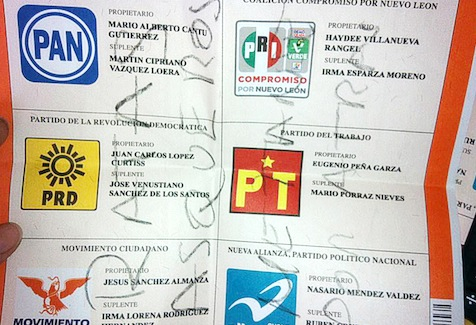 Let me tell you about electoral fraud – Part 2

One thing you can say about Mexicans is that they tend to complicate life through over-regulation. The best example of this is their electoral system, which is probably the most complex one in the world: 300 seats in Congress can be obtained in electoral districts where the seat goes to the candidate with the most votes. For the election of the remaining 200 seats, the country is divided in 5 large districts of 40 seats which are distributed through proportional representation. These seats are important because a party may never receive more than 8% in total above their PR seats. In addition, no party may receive more than 300 seats. Are you still with me? Similar complexity is visible in the rules and norms that guide the electoral process. One of my jobs is to read the country’s electoral code (300 pages) and the regulation of the way in which parties need to report on their funding (90 pages). Apparently, Mexico is the only country in the world that prescribes not only the size of the ballot box but the size of the slot through which you cast your vote as well.

Although Dutch people like myself have been confronted by our own fair share of ridiculous electoral rules (‘if you don’t use a red pencil, your vote is invalid’), some of the things I came across here left me rather baffled. Sympathizers of Andrés Manuel López Obrador (AMLO if you please) could choose between 7 different ways in which to cast their vote on one single ballot, depending on whether they wanted to vote for just one or a combination of two or three coalition parties. Several television programs were dedicated to explaining the ballot. In addition, the electoral law rules that in order to cast a valid vote, one must ‘mark’ his or her preferred candidate. But this ‘marking’ is open to interpretation. On a television program featuring all members of the Electoral Court (IFE), I witnessed a 15-minute-discussion on whether or not a ballot with a compliment next to one candidate and an insult next to the other should be regarded as a valid vote or not. In the end the judges agreed to disagree on whether such a ballot clearly demonstrates the voter’s intention or not and urged voters to stick their preferred candidate and leave their disapproval for other channels such as twitter.

Where does this urge to regulate each and every aspect of the electoral process come from? I guess a large part of it is due to the significant degree of (political) mistrust present within society at large. Suspicions over the pencils supplied by the IFE to the voting booths during the elections last Sunday form a nice example of this. Given rumours that these pencils were not erase-proof, voters decided to take it upon themselves to bring their own crayons and markers. As an acquaintance of mine noted, this led to a rule-crisis because election officials were afraid that the use of a marker could lead to the unintentional invalidation of ballots. Imagine that you use a very wet marker, fold your paper, and thus leave a mark on another candidate – thereby making it impossible to determine which candidate you voted for. Apparently, every electoral committee in the country spent a considerable amount of time discussing this delicate issue on the eve of elections

One of the problems of fighting mistrust with rules is that they only provide a solution until the next informal practice to circumvent the rules comes around. In order to prevent voters from casting multiple votes on the same day, the IFE supplied a marker with indelible ink to the voting stations so that the thumb of each citizen could be marked after having voted. But hey, discovered one alert citizen, the ink is no match for the power of Coca Cola. There goes your trust out of the window again. Despite all the IFE’s efforts to carefully orchestrate free and fair elections, the newspapers are hence full of stories of vote buying and breaking the secrecy of the vote. One remarkable tactic is the use of a group of small children – which may legally accompany the voter into the voting booth – which check how the voter casts his or her vote, thereby allowing for a financial reward afterwards. They even have a name for them: niños halcón – hawk children.

How will this end? I suspect that after careful deliberations the IFE will conclude that the rules were applied in the strictest sense possible and that it is impossible to prove that the provision of monetary gifts to voters actually had an influence on the electoral results. Perhaps they will propose a new round of reforms to the electoral code to remedy some of the informal practices encountered during the elections. Society will be left with the feeling that the IFE is unable to guarantee free and fair elections and that what is wrong with this country are its institutions. Given that informal practices always trump formal rules, perhaps it is time for a new strategy to counter them.