‘Gendering’ peace and conflict: is it all about women? 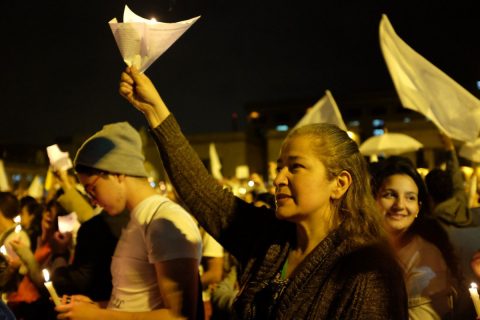 For a long time it was considered that those most affected by war were men. This was a result of the fact that men made up the largest parts of the warring parties, or were targeted for killings or enforced disappearances because of their membership to opposition political groups. This has long diverted attention away from other forms of violence that affect women, and the different ways in which men and women experience conflicts. The war in the former Yugoslavia and Rwanda’s genocide changed this, as it became clear that women were affected by specific crimes. Since the international criminal tribunals for Yugoslavia and Rwanda, it is recognised internationally that sexual violence – long seen as collateral damage of a less serious nature – can also constitute international crimes of genocide, crimes against humanity and war crimes. Since then, sexual violence has become recognised as the key ‘gendered’ impact of conflict and the area of ‘women, peace and security’ has been figuring prominently on the international agenda.

But this attention for sexual violence risks neglecting other gendered impacts of conflict, which go beyond sexual violence. It now often almost seems that only female victims of sexual violence are ‘real victims’ of conflict gender-based violence. Yet what about the other women, who have not suffered sexual violence, but whose lives were profoundly impacted by war? What about women’s strategies for resistance and survival, which are often overlooked as women now tend to be seen as the ultimate vulnerable group, in need for protection? But also: what about men, who are generally seen as the ‘bad guys’, while many of them have also suffered violence, sometimes also because of their gender? It is often forgotten that sexual violence is also perpetrated against men, aiming to ‘emasculate’ them through the ultimate humiliation of being raped.

The attention to sexual violence almost makes us forget where sexual and other forms of gender-based violence come from. ‘Gender’ is often used as a synonym for ‘women’, while gender-sensitive approaches to peace building often become an ‘add women and stir’ exercise. Yet gender does not refer to women, but to the relationships between men and women, which are characterised by structural inequality. By only addressing the symptoms of this gendered inequality – sexual violence – we are not necessarily addressing its root causes. Forcing women to break the silence about sexual violence might even risk causing more damage, if women subsequently have to return to societies that continue to be marked by structural gender inequality, where they are often blamed for having suffered this crime, are no longer seen as ‘pure’ and therefore see their futures destroyed. I am of course not insinuating that international tribunals should not address sexual violence, but if this is not accompanied by more structural societal and cultural changes, justice might be of little benefit for the survivors who testified.

Colombia’s Victims’ Law, on which my research focuses, echoes the international focus on women, peace and security and provides for a ‘differential focus’ that aims to protect women and other ‘vulnerable groups’. Nevertheless, my research showed that it is hard to translate such a differential or gender focus into practice. Reality often comes down to ‘doing something for women’, like paying specific attention to sexual violence or guaranteeing the participation of widows and female-headed households, yet fails to really challenge gendered inequality. In the villages where I worked, female-headed households are rare, while there are no publicly known cases of sexual violence. Seemingly there is therefore no need for a gender perspective, since everyone suffered the same. Yet both the present situation of these communities and their conflict experiences were gendered, which is not adequately addressed in the current process.

These villages are located in a strongly patriarchal culture, where women are meant to take care of the household and the children while men work on the field, generate income and therefore are those who make decisions, participate in public activities and lead the communities. Although violence against women takes place, it is not talked about, since like in many parts of the world it is seen as the inevitable consequence of being a married woman in a machista society. During the time of the displacement, many women took on new and important roles, working long hours to maintain their families as their husbands had a hard time making a living as farmers in the cities. Although women’s roles increased, men’s roles did not change, leading both to men’s frustrations for not being able to live up to their gendered expectations, and to women’s overburdening, having to generate income while remaining the key responsible for caring for children and household. Upon return, traditional gender roles were assumed again, in which men returned to being breadwinners and women were glad to return to a single caring role. Gender inequality remained.

Failing to turn temporal changes in gendered roles into structural transformations is a lost opportunity for transitional justice and other post-conflict reconstruction mechanisms. Rather than valuing women’s conflict-era roles and enabling the sustainability through promoting changes in household and gendered divisions of roles, women’s gains are lost. Of course, challenging gender roles is not easy, and simply paying attention to women is not enough. Working with men about what it means to be men, and what would be in the best interest of their wives, families and ultimately themselves – since the pressure of being macho men is a burden for many – is fundamental. There is also need for more profound analysis of how women can be supported to be more socially and economically independent, beyond the odd ‘women’s project’.

Therefore, ‘gendered’ analyses of conflict and ‘gendered’ transitional justice need to go beyond a rather limited focus on sexual violence, maintaining the image of women as a ‘vulnerable group’. A real gendered analysis of post-conflict reconstruction needs to look at both men and women, and analyse the ways in which structural gender inequality can be transformed, making sure sexual violence and other forms of gender-based violence become a thing of the past.

Sanne Weber is a PhD candidate and Research Assistant at the Centre for Trust, Peace and Social Relations (Coventry University). She is particularly interested in analysing how conflict affects gender relations, and whether and how transitional justice mechanisms are capable of addressing and transforming gendered and other structural inequalities.

She has just finished fieldwork in Colombia, analysing the gendered dynamics of Colombia’s land restitution and reparation process. For conSentido, she writes about transitional justice in Colombia.