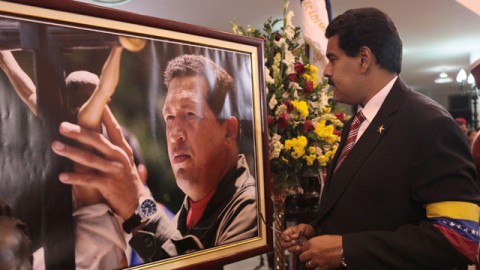 In a country where strong leadership was increasingly substituted for well-functioning political institutions, the death of Hugo Chávez will have profound ramifications for Venezuela’s political and economic stability. Although his anointed heir, Nicolás Maduro, is likely to win April’s presidential elections, the fabric of the Venezuelan political system has been torn apart with the bereavement of its charismatic but brash leader. Moreover, the country faces the two-headed dragon of a large fiscal deficit and increasing exchange-rate problems. In the wider region, the disappearance of the “New Left’s” divisive commander-in-chief may lead to more harmonious relationships between the Latin countries. Nonetheless, policy uncertainty may spill over into other countries and may affect the functioning of the already paralysed Mercosur trade bloc. Moreover, there is a significant risk of the financial problems of Venezuela and Argentina amalgamating and provoking a wider Latin American economic contagion.

After Chávez’s death was made public on 5 March, Venezuela’s electoral council (CNE) was quick to announce new presidential elections for 14 April. This violated the constitutional requirement that elections be held within 30 days of the death or abdication of the president. The supreme court (TSJ) also issued a ruling that vice-president Maduro was not required to step down in order to run for president, as the constitution stipulates a vice-president should, since he would now be sworn in as president. This sparked a heavy debate between the opposition, led by presidential candidate Henrique Capriles Radonski, and the ruling Socialist Party (PSUV). Unlike his socialist peers Rafael Correa and Evo Morales, Chávez and his followers built a strong personality cult around El Comandante, while neglecting the proper functioning of the state’s institutions. These latest constitutional doubts are likely to further erode trust in Venezuela’s institutions, while heightening the chances of future political personalism and power struggles.

Given that he was previously relatively unknown to the Venezuelan public, Nicolás Maduro has chosen the strategy of presenting himself as a  ‘selfless heir’ to Chávez, simply carrying out his wish and command. Although Capriles Radonski strongly reproaches the way Maduro capitalises on his mentor’s passing away, this strategy is paying off. While before, Capriles Radonski had a strong lead over any of Chávez’s successors in the polls, Maduro now leads by more than 14 percentage points, according to a recent poll.  Thus, given this lead and the strong incumbent advantage that the Venezuelan presidency affords, Maduro is highly likely to win the elections.

In an economic vein, Venezuela is headed for bad weather. Most analysts forecast meagre economic growth or even contraction for 2013, given the predominance of oil in the Venezuelan economy and the expected fall in crude oil prices. However, even if the economy were to pick up, Maduro would still be confronted with two major legacies left by Chávez. First, Venezuela has run a very high budget deficit in 2012 – estimates range around 10-17.5% –, adding up to an already substantial public debt of 35% of GDP in 2011. Given the country’s unpopularity on international credit markets, this will lead to soaring interest rates and severe obstacles in financing the budget. Maduro has already been courting China’s leaders at Chávez’s funeral, ostensibly to secure bilateral financing. Second, the government’s currency policies have become increasingly unsustainable. Although the government recently devalued the bolívar – the country’s currency –, the disparity between the official and the black market exchange rate is still vast. The administration is currently installing an official currency market, in order to counteract the large black market. Since most of the economic controls of the Chávez era are still in place, however, and since similar devaluations in the past did not do enough to balance the economy, the current measures are unlikely to be sufficient to stem the country’s international economic imbalances. Given the policy uncertainty emanating from Chávez’s death, and the effort and time that Maduro will invest in the upcoming elections and the formation of a new government, it will be very hard for Venezuela’s government to effectively combat these economic problems.

The passing of the first and most vocal of Latin America’s “New Left” socialist leaders will have a profound effect on regional politics. While Chávez’s two staunchest allies – Rafael Correa and Evo Morales – may take over his vociferous role, they are generally not as radical, volatile and divisive as him. Hence, the wedge that Chávez drove into Latin American politics – you were either for him, or against him – could now disappear, leading to a more cooperative political landscape. This all depends on how Maduro asserts himself domestically and internationally. The signals so far are confounding. Maduro cordially welcomed the charm offensive of Colombia’s president, Juan Manuel Santos, who tried to improve relationships with his neighbour while attending Chávez’s funeral. On the other hand, he has already soured his relationship with the US, asserting that Chávez’s cancer may have been the effect of a CIA-instigated plot. In the unlikely event that Capriles Radonski is voted into office, such concerns are unnecessary: he is firmly in the moderate camp of Latin leaders.

For the Mercosur trade bloc, the situation of prolonged uncertainty in Venezuela, its most recent member, only adds to its already existing problems. While the ousting of Paraguayan president Fernando Lugo in June 2012 led to political problems and Paraguay’s eventual suspension, Argentina’s heavy-handed economic controls have led to major frictions with Brazil. Chávez’s illness and death therefore do not help the political stability of the bloc. Economically, the decease of El Comandante brings even greater risks for the whole of Latin America. Venezuela’s anticipated economic problems are likely to spill over into the region, especially into neighbouring Colombia and oil-dependent Cuba. Moreover, if a financial crisis in Venezuela were to coincide with problems in financially unstable Argentina, a major economic crisis could engulf Latin America. Given the financial contagion witnessed in earlier crises, such as in Argentina in 1999-2002, many investors are likely to pull out of the whole of the region if one major economy is struck, let alone two. Although many of the Latin countries these days have strong economic fundamentals, they could thus still be severely affected by Venezuela’s economic ills. The death of Chávez therefore does not come very conveniently to Latin America’s leaders, and they will doubtless try to coax Maduro into solving his country’s economic problems first before giving  heed to politics.

Latin America’s countries are increasingly dependent on each other. The downside of this is that a major destabilising event such as the passing of Hugo Chávez sends shockwaves throughout all of the region. What the fruits of his death will be in Venezuela will all depend on how Nicolás Maduro and his PSUV cadre will deal with their newly acquired powers. Will they use them to quell the prospective economic crisis and to rebuild state institutions, or will they employ them to further personalism and cronyism? Whatever may be the outcome in Venezuela, Latin America’s leaders will have to work hard to insulate themselves from the political and economic instability emanating from the death of Chávez. There is one thing that both supporters and detractors of Hugo Chávez will agree on: in the past decades, very few men have left a stronger mark on Venezuela and Latin America.

Once Upon a Time in Venezuela: Drijvende gemeenschap zinkt steeds dieper weg