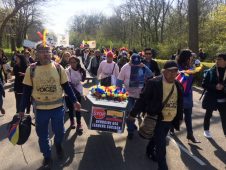 ‘No more war! No more murdering!’ On this sunny April afternoon, hundreds of Colombians have gathered in front of the Colombian embassy in The Hague. They are marching to the International Court, to demand justice for the numerous Colombian human rights defenders that were murdered in recent years. Estimates are that the number of murdered human rights defenders since 2002 ads up to an astounding 825.  A seemingly endless black sheet, with in white stating the names of the deceased, is carried at the centre of the march. María, a... » meer lezen