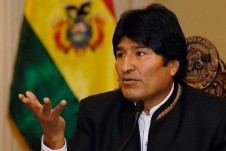 This article was first published on Global Risk Insights (GRI).   After winning the 2014 elections by a landslide and maintaining his two-thirds majority in the lower and upper houses of the Assembly, Bolivian President Evo Morales now has both the political capital and the majority to amend the constitution. What are the risk and opportunities of another term for Evo Morales? In mid-September, president Evo Morales announced that he would run for a fourth term, over the period 2020-2025. Morales is not the first in the region to seek... » meer lezen

In a country where strong leadership was increasingly substituted for well-functioning political institutions, the death of Hugo Chávez will have profound ramifications for Venezuela’s political and economic stability. Although his anointed heir, Nicolás Maduro, is likely to win April’s presidential elections, the fabric of the Venezuelan political system has been torn apart with the bereavement of its charismatic but brash leader. Moreover, the country faces the two-headed dragon of a large fiscal deficit and increasing exchange-rate problems. In the wider region, the disappearance of the “New Left’s” divisive commander-in-chief may... » meer lezen