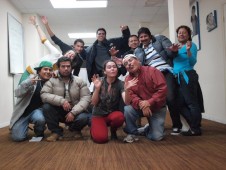 In the Pastoral Migratorio refugee help centre in Ibarra, northern Ecuador, a Colombian refugee  sat on a bench in the sun with her three children. The boy played in the mud; the other two slept on top of her. She appeared exhausted as she waited in line for legal support in housing. She was  worried that they might not get it. They were still waiting for their refugee status to be accepted; if  it was not, they were going to be asked to return to Ipiales, where they had fled from.... » meer lezen