The ambiguity of the word “freedom”: interview with director Diego Mondaca 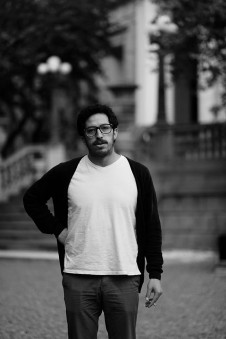 We know little about life behind bars, what we know is often based on prejudice and indifference. We don’t want to know. Prisoners are not here, they simply don’t exist. In his documentaries La Chirola (2008) and Ciudadela (2011) Bolivian director Diego Mondaca confronts us with our ignorance. The similarities between the lives of “insiders” and “outsiders” suggest that “freedom” is not something we can split in two: being free and being imprisoned. “Freedom” is more dynamic, fickle and perhaps even unattainable.We are all people with a life and a story, sometimes free and sometimes not, free in some cases and in others not, the freedom or lack of it doesn’t have to do with the environment we are in.

La Chirola and  Ciudadela: two documentaries that show two sides of the same story and millions of other stories at the same time. In La Chirola (popular word for “prison” and name for San Pedro’s prison in La Paz, Bolivia) we see Mario Cajías, ex-convict, telling us a story, like a fairy tale. He talks about his life and the time he spent in prison. Mario talks about the friendship protection and the feeling of equality he can’t find in the outside, so called “free”, world. Nostalgically and with mixed feelings he looks back to his life in prison. Mario admits life outside prison has given him little freedom. He spends his days alone reluctant and afraid of the hustle and bustle of the city. His dogs are his only companions; friendship can sometimes be found unexpectedly. Mario’s story is confusing. Shouldn’t time in jail be a punishment so that, now he is out of jail, he feels free and liberated? It teaches us that “Freedom” is not that easy to define. In an almost antithetical way, Ciudadela shows us daily life between prison walls. San Pedro prison is known for having a structure that ironically resembles that of the city. Staying on the side, the Bolivian director takes us through narrow alleys and chaos in this “small” city. We see daily rituals and objects: a dining table, a football match, music that we recognise. It seems so normal, that we forget we’re watching life in prison. However, Mondaca doesn’t let us wonder too much. When we start feeling comfortable, the camera turns to the walls that surround La Ciudadela. It seems to scream: Remember, this is a prison!

Ciudadela shows us, “free” people, what freedom is “inside”, in prison. La Chirola is about Pedro who talks about his demons and prison “outside”. Why this topic?

I’m interested in how resilient people can be; it’s surprising to see how easy it is for a human being to recover from traumas and to overcome emotional pain.  We need to give “meaning” to our lives, whatever that may be, but that sense of “meaningfulness” helps us to live. I started to read a lot about this subject, no specialized literature about prisoners – I avoided that- but I did study authors like Victor Frankl who talks about “the human condition”. That is when I understood how ignorant I had been regarding this subject.  We don’t know anything, the only things we do know are dates and numbers, such as:  more than 3 thousand men, women and children live in San Pedro prison.When I first entered the “Panoptico” I felt uncomfortable. Only later, we understood that we had to combine things. We had to know and watch watch and know, both are connected. If you go to San Pedro without knowing the story behind it, you haven’t seen a thing, You won’t understand. At the same time, if you know the story but haven’t been there, you won’t understand either. Ciudadela shows a micro-society that works as any other society. Most of the time, the viewer forgets he’s being confronted with lives deprived of freedom. You get the impression that daily life in prison is much like that outside of prison: working, eating, family… But, Pedro Cajías in La Chirola nostalgically looks back on his life in prison: the friendship, the company, the support and some sort of protection that made him feel “free”. Could it be that sometimes it’s better “inside” than “outside”? Or that the fine line of “freedom” that divides the two realities is fiction?

It’s better to say that we are all equal. Human nature will always find a way to live together, to survive. Inside or outside, every place has its dangers.  Due to its architecture and its social structure, San Pedro is a living example of the ambiguity of the word “freedom” and its meaning in our society. So, we are aware of our real limits, walls if you want, that are part of our education.

In some scenes in Ciudadela we see life in prison from the eyes of a young boy, your guide? Running around in the alleys, as if we know the structure by heart, we move swiftly and hardly see faces…perhaps on purpose. How was your relationship with the prisoners? I can imagine not everyone liked to be filmed by a guy from “outside”, as if they were monkeys in the zoo.  Is that why you chose to film from that perspective? Did it make it easier for the prisoners to tell their story in front of the camera?

Part of the process to understand San Pedro is becoming aware of the real dynamics inside. It’s chaotic because there constant and quick changes. This is something we fail to understand and look at with prejudice. For example:  I thought that “time” in prison is slow and dreary. I was completely wrong. “Prison is like a small city, a “Ciudadela”, “with people, and stories; it’s a whole world. And a very impressive one.”  To quote one of the main characters.  The aesthetic, photographic and musical side of the film had to reflect that feeling of constant movement, the eclectic architecture , the white light… It’s almost like a painting by Escher. San Pedro is a surreal place, but very unique.

About my relationship with the prisoners. You have to build up trust, bit by bit. One of the problems was getting the prisoners to talk. Not that they didn’t want to, but because of what they had been through. The experiences they had been through were so confined they couldn’t talk about it. So we decided to respect that silence. We didn’t want to use their testimonies as complaints or grieves. Ciudadela hardly has dialogues, but it does show a lot of concepts that come from observations of daily life. We spent a lot of time just talking and observing rather than filming. Just being there and listening to the prisoners triggers a lot of communication. A kind of communication that has been and still is denied to prisoners. I filmed in a place that people would call “ruptured”, but that place is a lot like what we have “outside”. So it juxtaposes everything and thanks to that juxtaposition San Pedro is a scaled model of our society.

The fragment you share with us seem free of morality, inequality without wanting to accuse or victimise the main characters. Is that the starting point of you projects or was it something that became obvious while you were filming?

I was told that “morality” is dangerous, so leaving that aside was a starting point. We were not the ones to judge. Cultivating that perspective was part of the process for La Chirola as well as in Ciudadela. It’s not easy to leave the values we grow up with and are confronted with every day, aside.

Ciudadela was selected for IDFA (Festival de cine Documntal Amsterdam) 2011 and since then it has been shown in different countries in Europe and Latin America. How was it received in Bolivia? Did you organise debates to talk about the documentary, any special comments or questions from the audience?

Everything started thanks to IDFA, in 2008 we showcased La Chirola, it was my final project for my thesis in “La Escuela de Cine de Cuba” and it was a big success. The IDFA gave me the opportunity to be watched and listened to. At that time I had already been working on Ciudadela. The success of La Chirola secured funds from Jan Vrijman-IDFA, WCF, Berlinale, and DocBsAs to produce and show Ciudadela in 2011.

In Bolivia we’ve only shown the documentary recently, in 2012. The first screening was for the prisoners in San Pedro, the main characters. The discussions that followed contributed a lot to the film and my point of view.  I want people to see that there are real people living in San Pedro…. That would be a major step. The debate is growing in Bolivia, that’s important. Ciudadela doesn’t explain anything but it does raise questions that we had been afraid to ask. “Why them, and not us? What do we know and ignore about LIFE between walls in our country? Are we facing reality and its consequences? It’s a documentary that evokes questions… During discussion I met people that were convinced inside prison it’s completely the same as “outside”.  They had never been inside, but they recognised themselves in the prisoners of San Pedro and the places they lived in. Recognizing ourselves is essential to start reflecting upon this issue.

Documentary and not fiction for Diego Mondaca, why?

In the end, fiction and non-fiction are the same. Both explore reality and emotion. I’m more interested, if we have to split them, in the documentary as a way to tell more about certain things in images. Things about life but also about language. That is why documentary work, for me, is more a creative way to talk about life by showing reality.

In November, your work will be shown in the festival Filmar en America Latina in Geneve (www.filmaramlat.ch/332-Decouvrez-les-invites-de-la-15eme-edition.note.aspx) in which you share stage with Jorge Sanjinés one of the pillars of Andean Bolivian film. Is Diego Mondaca inspired by the work of Sanjinés? How do you see today’s Bolivian filmscene?

I personally admire the work of Jorge Sanjinés en the Ukamau group. He creates cinema that is based on concepts and real concerns. His films mean a lot for the New Latin American cinema thanks to the political and poetical content. Thanks to these ideas, his work is globally appreciated. That’s my inspiration. With regards to the Bolivian cinema, I think it’s trying to get out of a confused period. Our institutions and the government cannot yet guarantee a healthy climate for Bolivian cinema because it has other goals.

Can you tell us something about your new project, Chaco?

CHACO is gradually developing, at the moment I’m looking for funds. It’s a story about the memory  and the horror of the military campaign against Paraguay in the 1930s. The irony and absurdity of the Bolivian jiggery as well as the reasons for this war.

Perhaps it is a bit of an unethical question to ask, You don’t need to answer it, but I would like to know what happened to Pedro. How is he?