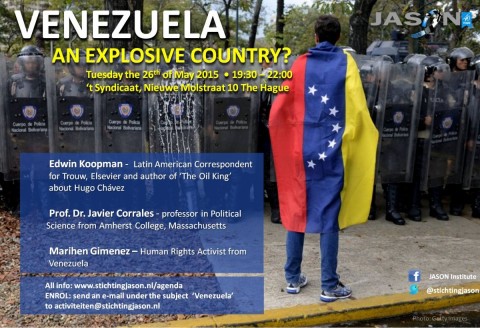 The United States stated labeled the country as a threat to its national security and experts say the situation is about to explode, resulting in a tremendous humanitarian crisis. Libya? Syria? No: Venezuela.

Nationwide student protests started in February 2014 and attracted global attention when several students were killed. After that, protests and riots are daily, we hear news about missing students, killings and crimes against humanity. The south-American country has an increasing shortage of food, medication and machine-parts. This seems to fuel the protests, riots and violence in the country. Dutch Minister of Foreign Affairs, Koenders, also stated to closely follow the situation, for the Dutch Caribbean Islands are just a few miles apart. What is really going on at the other side of the ocean?

JASON Institute managed to get top experts to discuss this and give an insight on the situation of this nation. Venezuela; is it truly an explosive country?

– Prof. Dr. Javier Corrales; from Amherst College, Massachusetts professor of Political Science at Amherst College in Amherst, Massachusetts. He obtained his Ph.D. in political science from Harvard University.Corrales’s research focuses on democratization and political economy of development. His work on Latin America has focused on presidential powers, political parties, economic reforms, international relations, and sexuality. He has published extensively on Venezuela, Cuba, and Argentina. He has also been a consultant for the World Bank, the United Nations, the Center for Global Development, Freedom House, and the American Academy of Arts and Sciences.

– Human rights activist Marihen Gimenez from Venezuela will tell about her personal experiences with the regime.
Programme