The Political Economy of the Extractive Imperative in Latin America: Reducing poverty and inequality vs. ensuring inclusion and sustainability? 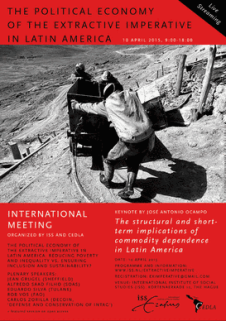 One of the prominent features of contemporary development politics and policies in Latin America is the prominent role of the state in directing and powering economic development. Accompanying increased state presence in economy and society, another consensus envisions the intensification of natural resource extraction as crucial for development. This extractivist drive is especially pronounced in the countries characterizing the ‘turn to the left’, which have at the same time played host to alternative development approaches, be it the concept of ‘buen vivir/vivir bien’ or the granting of constitutional rights to nature. While Venezuela, Bolivia, and Ecuador have become emblematic of these processes, their impact can be felt across much of the region.

This convergence between state prominence and intensified extraction has emerged within a particular context in which the electoral successes of the leaders in power have been underwritten by promises to eradicate what has been seen as the two cardinal sins of neoliberal policies: persistent poverty and societal inequality. Eschewing aggressive redistribution policies, these states have instead sought to achieve rapid, poverty-reducing growth accompanied with largely expanded expenditure for social policies.

An ‘extractive imperative’ was thus borne as natural resource extraction came to be seen simultaneously as source of income and employment generation (through investment in extractive facilities, infrastructure, etc.) but also of financing for increased social policy expenditure. According to this imperative, extraction needs to continue and expand regardless of prevailing circumstances (be it low/high prices of commodities, protests of indigenous groups, or environmental concerns), with the state playing a leading role in facilitating the process and capturing a large share of the ensuing revenues.

A vibrant debate has since emerged regarding the best way to characterize these attempts, with some commentators hailing the birth of a post-neoliberal paradigm and others asserting that we are witnessing reconstituted neoliberalism. Various continuing or new dynamics – such as increased investment from China and other forms of ‘South-South’ flows – further complicate the overall picture.

This workshop aims to move beyond facile dichotomies to address the political economy of the ‘extractive imperative’ and the tensions it increasingly generates in Latin America.

Specifically, the workshop will engage with these broad sets of questions: