The Mexican Connection #1 Society vs. the State 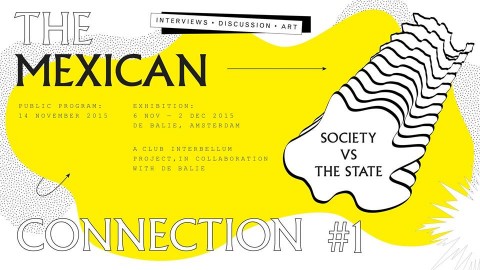 Ever since the war on drugs erupted in 2006, over 100.000 people have died and 25.000 have disappeared – and the body count is still rising. Moreover, only one in one hundred crimes are solved. Why has Mexico become so violent and lawless over the past decade? Is all this bloodshed just a side-effect of a booming drug trade between Mexico and USA, or is there more at stake?

Club Interbellum present in collaboration with De Balie The Mexican Connection #1, two programs about Mexico and a society that revolts against a weak state. This program will show how an increasingly powerful economic elite alienates itself from an increasingly powerless society.

By connecting important voices The Mexican Connection aims to map the coordinates towards structural change. There will be an afternoon and an evening program. More info below.

Since Mexican president Enrique Peña Nieto came into power in 2012, the death toll among journalists has increased dramatically, making Mexico one of the most dangerous places in the world for journalists to work in. A whopping 90% of the murders on journalists go unpunished. The federal government refuses to acknowledge that almost half of the attacks have been traced to government officials.

Mexican top-journalist Carmen Aristegui who is regarded as one of Latin America’s leading journalists and left-wing opinion leaders, gives a first-hand account of the types of censorship she and her team have been suffering this last tumultuous year. Her case is exemplary for the visible and invisible repression that important Mexican institutions are facing today.

The interview with Carmen Aristegui will be followed by an expert meeting where important voices will discuss the different strategies that are needed to protect an increasingly endangered free press in Mexico.

In large parts of Mexico the state has been failing. High levels of corruption and impunity have enabled drug cartels to get hold of local shadow-economies, natural resources and even people’s hearts. The international community tends to view this extreme violence and impunity as the ‘collateral damage’ of an unstoppable drug trade between USA and Mexico. But is this true? How far does the influence of the narco reach into the rest of the world? What makes Mexico’s case so different from other (former?) mafia states like Russia and Colombia?

During this program the audience becomes acquainted with the many faces of the narco infiltration and state capture beyond the mediatized stereotype. In a series of interviews and reports, the economic, judicial, social, historical, cultural and even religious roots of the narco are revealed – forming a nuanced and complex picture of Mexico’s current safety crisis.

Come and enjoy the exhibition “Motley Mexico” that will be on show in the cafe and foyer of De Balie for a whole month!

A collection of self-reflexive stories about the daily balancing act between the holy and the profane, pride and self-deprecation, hope and fear.