Screening + Q&A: The War on Democracy in Latin America 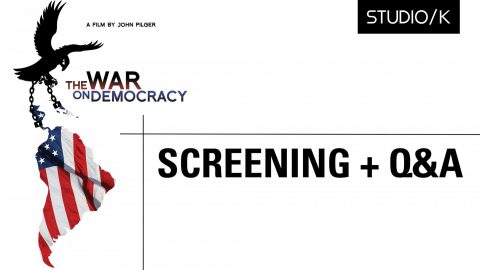 Latin-America is currently experiencing mass protests across the continent, from Chile to Haiti and Ecuador. Yet we have also seen a re-emergence of western-backed anti-democratic forces, with right-wing military coups in Bolivia (2018) and Honduras (2008) as well as a judicial ”soft coup” in Brazil (2016).

During this event, we’ll be screening a classic award-winning documentary on the influence of Washington in Latin-America since WW2, followed by a talk and Q&A with long-time Argentinian activist Alejandra Slutzky. How much has changed since The War On Democracy was first released in 2007? And what can we do in solidarity with Latin-America? Join us for a fruitful discussion in Studio/K on the 13th of February.

✊ About the speakers
Alejandra Slutzky is a political refugee from Argentina, whose parents and much of her family were disappeared under the US-backed Videla dictatorship. She is one of the founders of H.I.J.O.S. Netherlands, part of the international H.I.J.O.S. organization that supports the children of the disappeared in Latin-America under various dictatorships. Alejandra has authored numerous books and is also active as an anti-racist organizer for Comite 21 Maart in the Netherlands.

Nicole van Baal is a chilean-dutch journalist who has worked and organized both in Chile and the Netherlands and is currently an active member of various Chilean-Dutch organizations (Chilenos en Holanda, Chile Despertó Holanda and Diáspora Solidaria), organising many demonstrations in solidarity with the Chilean people.

✊ About the film
Using archive footage sourced by Michael Moore’s archivist Carl Deal, ‘The War On Democracy’ (2007) shows how serial US intervention has toppled a series of legitimate governments in the Latin American region since the 1950s. Besides focussing on the real story behind the attempted overthrow of President Chávez in 2002 and how people rose up to force his return to power, the film zooms in on the wider rise of populist governements, lead by indigenous leaders striving for Latin independence.

✊ About the organization
This program is organized by Studio/K in collaboration with H.I.J.O.S. Netherlands, part of the international H.I.J.O.S. organization that supports the children of the disappeared in Latin-America under various dictatorships. 50% of ticketsales will be donated to the H.I.J.O.S. Foundation.