“Mary in Times of Crisis” 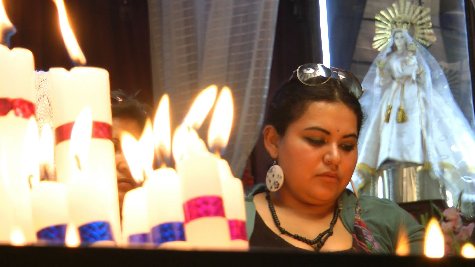 A film on the veneration of Maria in Bolivia by Sharis Coppens and Sanne Derks.

To Lourdes you go for health, to Urkupiña for wealth. ‘Mary in Times of Crisis’ shows how money and religion go hand in hand at the shrine of the Virgin of Urkupiña in Quillacollo, Bolivia. During the whole year pilgrims come to ask for financial help and material goods. They do this not only verbally, but also materialize their requests in the most characteristic ritual of this devotion: hammering stones out of the mountain.

The stones are seen as money being lent by the Virgin. We follow three Bolivian women in their activities around the four-day during fiesta, when the amount of pilgrims increases dramatically: the two elderly indigenous sisters Virginia and Victoria who earn a living by theatrically selling prayers and blessings to the pilgrims, and the rock-chick Escarlent who comes to Mary in the hope she can keep her bar from going bankrupt. Their paths cross at the pilgrimage shrine

The documentary has been made by anthropologist Sanne Derks in cooperation with the documentary producer Sharis Coppens. The film is in Spanish with English subtitles. Watch the trailer.