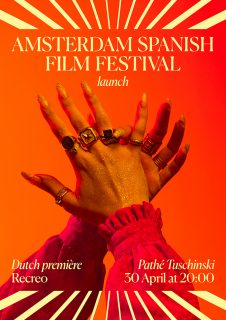 Recreo (Break) will festively kick-off the countdown to the fifth edition of the Amsterdam Spanish Film festival on April 30th at Pathé Tuschinski. The program launch event will set the tone for the upcoming fifth edition, which will run from May 28th til June 2nd in Pathé Tuschinski, Pathé de Munt, Eye & Cinecenter. We will introduce the 2019 program with the most powerful, thought provoking and enjoyable Spanish spoken films of the year. Special guests, Q&As, events, complimentary drinks, bites and more! Join us to discover this year’s program and celebrate Spanish Cinema together!

Recreo is the first film co-directed by Argentinian filmmakers Hernán Guerschuny and Jazmín Stuart and won the Silver Colon for best actress to Pilar Gamboa at the 2018 Huelva Latin American Film Festival.

Synopsis: Three couples with their children. A long weekend in the countryside. A reunion between friends that starts with enjoyment and laughter becomes a cohabitation that will bring up old conflicts, hidden secrets, and unexpected encounters. Like an x-ray of those who are in their 40s, Break dives into the duality of family life, the fantasy of returning to teenage years, pending wishes, the contradictions of the bourgeois life, and the time that escapes us.

Candid and contemporary with moments of profound intelligence Break is at once a dynamic comedy and tender drama. Replete with identifiable characters, it shines a refreshing light on anxieties about middle age, weaving in questions around generational differences and class tensions in a manner that is bold, attractive and undeniably funny.