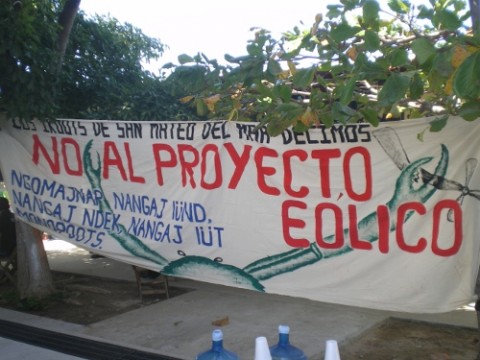 Two Mexican activists, Mr Chávez and Mr. Velázquez are travelling to Brussels to campaign against the building of a massive wind mill farm in Santa Teresa Sandbar, affecting 14 communities and a population of 170.000.

This project threatens to destroy the primary food sources of several indigenous communities, the flora and fauna of the areas, and the people’s ancestral ceremonial centres. The project is being imposed in an antidemocratic way by the Mexican state, violating Mexican laws and using violence and threats of violence against the community leaders and organisers.

This project is financed amongst others by the Dutch pension fund PGGM, which Mr. Chávez and Mr. Velázquez will be meeting during their stay in Amsterdam. Mr Chávez has experience in the successful struggle against the building of a hydroelectric dam in La Parota, which would have flooded 17,300 hectares, affecting 36 communities and displacing 30,000 peasant farmers.

During this public conference, Mr. Chávez and Mr. Velázquez will reflect on the struggle of La Parota and the struggle of Santa Teresa, giving details about the consequences of these megaprojects for the environment and the livelihood of the communities, and they will discuss the strategies they are adopting to oppose those megaprojects.