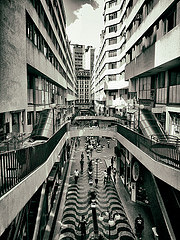 Until the 20th Century, Brazil’s territorial occupation has been mainly concentrated less than 100 kilometres from the Atlantic Ocean coast. During the second half of that century began an intensive occupation towards the West.

Nowadays Brazil presents a territorial occupation very different from other Latin American countries, with many huge agglomerations with more than 2 million inhabitants in the hinterlands, Amazonia included. In order to give a general overview concerning urbanization and the territorial occupation in Brazil this lecture explores how the relation among State, economic and institutional factors have contributed to configure the contemporary Brazilian spatial organization.