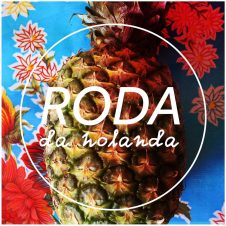 You are walking down a street when suddenly you hear the drums. You turn around the corner and there you see a group of musicians, sitting around a table, playing samba, laughing and sharing an ice-cold cerveja. People around them are dancing. Men, women, young, old, everybody is welcome. They sing along with the songs and they clap their hands. Salve o Samba!!

We’re celebrating Brazilian music with musicians from all over the globe with Roda da Holanda. From now on monthly at Pllek in Amsterdam-North! Also, DJ Graham B will spice up this Brazilian Beatroots with lots of latin grooves and beats!

DJ GRAHAM B
Graham B Started playing exclusive Brazilian sets while supporting Zuco 103 when they started at Meander Cafe back in the late 90’s. He joined singer Viviani Godoy and producer Alain Esdinazi and together they formed a band called Electro Coco and won and Edison Award for the production of their album called Coco Do Mundo in 1995. Graham joined top Amsterdam Samba School called Unidos at this time and his first solo production was a hit with Gilles Peterson called Sambamadness.